Founded in Parma (Italy), Cerve quickly became the focal decorating point for local ceramic and glass industries; indeed the name Cerve derives from CERamica and VEtro. Over the years the company began to gradually specialize itself in the glass sector, synchronizing its production with that of the surrounding glass industry, introducing new brands and its distinctive decorating techniques onto the market. In and around the 80’s, given its success, the company was split into two distinct divisions; one concentrated on pure decoration and the other dedicated its time to putting together a full range of bespoke kitchen and home products. Those same years saw the introduction of a growth policy which entailed large investment plans; new production plants were built and new state of the art technology was acquired to add to the existing plants at the time which included frosting, sand-blasting an drilling amenities. During the 90’s Cerve foresaw the need to further expand its engineering plants and steadily became a world leader in mechanical and decorative applications to glass, thus creating a benchmark in this extremely competitive world market place. 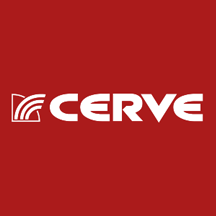